Blog
Home Back to Previous Blogs Generating Power in a Competitive Market - What Cost Do You Use to Dispatch Your Unit?

Generating Power in a Competitive Market - What Cost Do You Use to Dispatch Your Unit?

The dispatch of a power generation unit in a competitive market is based on the costs required to produce power. The bid price is the amount of money required to ensure no money is lost by simply operating the machine. Profit and the recovery of fixed costs occur in the margin between the bid price and the market-clearing price.

Typically, the bid price is the variable cost of operation. These costs include both the fuel used to operate the machine and the fuel required for start-up and shutdown. The bid price is typically based on the unit’s heat rate curve and fuel use on past start-ups and shutdowns. The bid price also includes consumables required for start-up and operation including chemicals and other incidentals such as lubricating oil, water, hydrogen gas, or anything consumed in the start-up or shutdown process. Bid prices can also include variable maintenance costs.

Traditionally, power companies operated their assets from a baseload perspective. Units were dispatched into the regulated market based on their fuel efficiency and fuel cost. The operating goal was to run from scheduled overhaul to scheduled overhaul with minimal forced outages in between. That operating regimen incentivized a maintenance strategy heavily dependent on time-based preventive maintenance inspections. The goal was to manage risk by identifying equipment to repair or replace as necessary to ensure maximum reliability between overhauls.

Most maintenance spending was time-based and considered “fixed” cost, which is incurred whether the unit runs one day or every day. The variable costs, fuel, and operating consumables are strictly tied to unit operation. If the unit does not operate, the money is not spent, meaning that the reliability of unit operations was king.

The key to profitability in a baseload operation is to efficiently manage overhauls and to minimize forced outages. In the past, utilities managed risk with excess capacity and predictability. Maintenance costs for baseload could be relatively high from replacing or maintaining equipment before it expended its useful life. Costs were covered by a rate base and were a secondary concern.

Then markets began to change. Market deregulation eliminated the “obligation to serve”—where regulators required companies to operate units at any time, regardless of whether they made money or not—and removed the rate base recovery methodology for maintenance expenses. Instead, plants now operated for profit. Operating margins for traditional base assets began to shrink, driving utility operators to move away from annual overhauls to longer periods between outages. Major equipment inspections moved from annual overhauls to two-year intervals, three-year intervals, and out to five years. As a result, maintenance strategies incorporated new tools and methods to better identify the timing of equipment failures.

The goal became “just in time” maintenance to be performed during planned outages to maximize reliable equipment life. Tools implemented to achieve this shift in maintenance strategy include condition-based maintenance which uses vibration, thermography, oil analysis, metallurgical testing, and other analytical methods. These efforts are designed to collect data to accurately predict the remaining machine life prior to failure.

As a result of these changes, overhaul strategies are evolving. Overhaul scope now typically includes only those maintenance activities required to reliably run the unit to the next outage. Maintenance schedules now consist of activities using a combination of operating hours, starts, condition-based monitoring data, and time to establish the work scope. The maintenance risk strategy has shifted to balancing reliability and costs.

How Do You Decide Whether a Maintenance Cost is Fixed or Variable?

You may have changed how you maintain your plant, but have you changed the cost basis used by your dispatcher to enter bids on your units?

What is Your Unit’s True Variable Cost?

The exchange of information between the dispatch team and the plants is a critical factor in operating profitably. In many cases, units are dispatched into the market assuming fuel and emissions as the only variable costs. This assumption can cause marginal units to operate at a loss, failing to recover revenue sufficient to offset variable maintenance.
It is equally important to avoid overstating the variable maintenance cost. A recent Solomon client had overstated the variable maintenance cost for their plant. The overstated cost raised the bid price used by the dispatcher. Since the market price cleared below the bid price, no dispatch was awarded, and the unit sat idle. If the cost had been stated correctly, the plant would have operated for a small profit. Dispatch of the plant increased by 50% upon correcting the variable cost used by the dispatcher. See Figure 1 below represents a typical market. 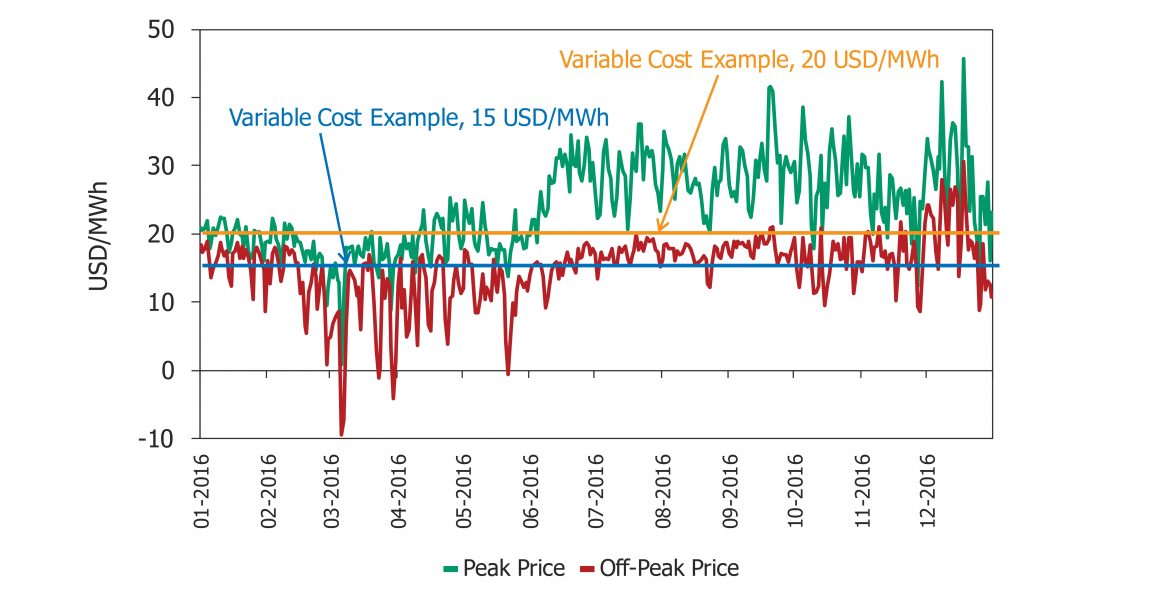 Figure 1 illustrates the difference between a 15 USD dispatch cost and a 20 USD dispatch. The unit with a 15 USD cost would be dispatched most of the time for at least daily operation. The 20 USD plant example might only be dispatched the last half of the year when the peak price is well above 20 USD and the off-peak price is at or near the 20 USD level.

Do you know your unit’s true variable cost? If so, does your dispatch group know? Frequently updating the information used by your dispatcher to set the bid price will provide peace of mind knowing that operating the unit will not be a money-losing decision.